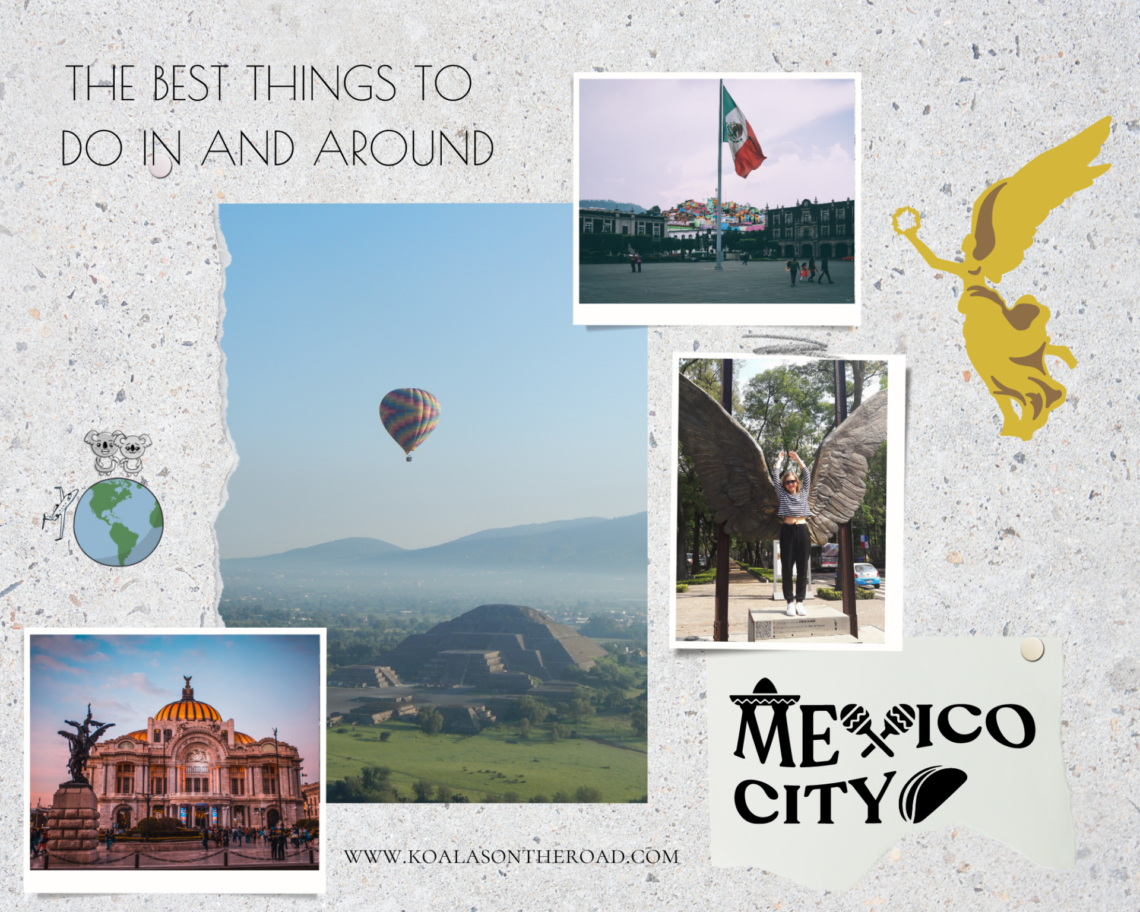 Visiting Mexico wouldn’t be complete without its large capital. CDMX is considered a separate entity without being formally a state and I think it’s worth a few days stay because it’s one of the most important cultural and financial centres in the world. So even if you felt in love with Yucatan and you would prefer to continue your journey on the beach, I encourage you to find at least a couple of days in your calendar and head to the most-populous city in North America.

Before we start, the first thing you should consider when you go to Mexico City is your safety. Remember we are talking about one of the biggest and not necessarily secure cities in the world. As much as I loved exploring CDMX, I will give you the same advice I was given – don’t go out at night if you are not in a big group of people and try to plan as much as possible before the sun goes down.

Another important point to remember is the fact that Mexico City is situated at an altitude of 2,240 meters and the temperature can change from one second to another. So don’t overestimate the weather if you see no clouds outside, it may start raining in one hour. And now, let me show you my favorite spots!

The capital of Mexico is simply enormous, so my first impression was that everything seemed bigger and larger than any European city I’d seen before. CDMX was the first Latin-American capital that I visited and even now, after my backpacking trip and seeing many other big cities like Buenos Aires, Rio de Janeiro, La Paz or Lima, I still think that Mexico City is a real giant comparing to the rest. No matter how long you stay in CDMX, you will always leave this city with the feeling that there is still so much undiscovered. But is it possible to see the most esencial places in few days? Definitely yes.

You can start exploring the city from its old town, because this is where the most emblematic spots are found. I encourage you to visit the Cathedral, which is situated atop  the former Aztec sacred precinct near the Templo Mayor – the main temple of the Aztec people in their capital city of Tenochtitlan. The old town together with Tenochtitlan remains is placed on UNESCO list and is a simple must during your stay in the capital of Mexico. The Cathedral is situated in Zócalo, the Main Square of the city, and only few steps away from The National Palace, a home to beautiful paintings made by Diego Rivera. I recommend this place to everyone, even if you are not a big art lover, because his paintings are tremendous and truly impressing. The most popular mural covers an entire wall and you can find his famous wife on the painting – Frida Kahlo. The way Diego Rivera mixed the colors is amazing and yes, he was a bad ass as a husband but… a very talented one.

Speaking of Frida, there is La Casa Azul, The Frida Kahlo Museum located a in one of the oldest and most beautiful neighborhoods in Mexico City, downtown Coyoacán. I couldn’t make it to visit it but if you have some extra time, make a note and try to visit this beautiful residence where the artist lived most of her life.

If you are craving for more art, you should also reserve few ours to visit the National Museum of Anthropology. It’s the largest and most famous museum in Mexico. It contains important artifacts from Mexico’s pre-Columbian heritage, such as the Stone of the Sun – the most significant Aztec Calendar Stone.

After few hours with this enormous collection, you may probably need a small break so you can head to the Chapultepec Park and then walk down the largest street I’ve ever seen – Paseo de la Reforma. Just keep in mind that the walk back to the center will take you minimum 2 hours. You can also visit the Angel of Independence, a victory column on a roundabout of Paseo de la Reforma which was built in 1910 to commemorate the  centennial of the beginning of  Mexico’s War of Independence. If you wake up very early, you should manage to visit the Cathedral, Zocalo, The National palace and the Museum of Anthropology in one day. Next morning you can head to to the Plaza of the Three Cultures. The name “Three Cultures” is in recognition of the three periods of Mexican history reflected by buildings in the plaza: pre-Columbian, Spanish colonial, and the independent “mestizo” nation. In the afternoon, you can come back to the center and visit the Palacio de Bellas Artes (Palace of Fine Arts), which hosts notable events in music, dance, theatre, opera and literature in Mexico and has held important exhibitions of painting, sculpture and photography. Consequently, the Palacio de Bellas Artes has been called the “Cathedral of Art in Mexico” and I think it’s one of the most beautiful buildings in CDMX.

To end up your day, you can watch the sunset from the Torre Latinoamericana which is widely recognized internationally as the world’s first major skyscraper successfully built on highly active seismic zone. The skyscraper notably withstood the 8.1 magnitude Mexico City earthquake in 1985 without damage, whereas several other structures in the downtown area were damaged!

There is a lot more to do in Mexico, like listening to mariachi on Plaza Garibaldi, visiting the artisanal market of La Ciudadela or floating through canals in traditional trajinera boat at Xochimilco Floating Gardens, so if you have more than 2 days, try to enjoy the capital to the fullest! 🙂 Teotihuacan is called “the city where men become gods” and it’s one of the most important archeological sites in Mexico and in the entire world. Climbing two hundred steps of the Pyramid of the Sun was definitely worth the views!

Teotihuacan was the largest city in the pre-Columbian Americas and the grandeur of this place is simply incomparable until these days. The whole city seems to be aligned astronomically, for example the front wall of the Pyramid of the Sun is exactly perpendicular to the point on the horizon where the sun sets on the equinoxes! The rest of the ceremonial buildings were laid out at right angles to the Pyramid of the Sun, while the Avenue of the Dead points at the setting of the Pleiades. The second largest pyramid, the Pyramid of the Moon, is located at the end of the Avenue of the Dead, and was used as a stage for performing ritual sacrifices of animals and humans upon. These pyramids have survived thousands of years and it’s only thanks to their inhabitants abilities that we can still admire them today.

During my visit there was a group of Indians in Teotihuacan performing Danza de los Voladores. The “Dance of Papantla’s Flyers” is a ritual originated with Nahua, Huastec and Otomi peoples in central Mexico. According to the myth, the ritual was created to ask the gods to end a severe drought. Basilica of Our Lady of Guadalupe

The Virgin of Guadalupe is the Patroness of the Americas and the way Mexican people adore the Virgin for me is comparative with how much we Polish people love our Pope Juan Pablo II. There is no Mexican who wouldn’t be praying to the Virgin of Guadalupe and the Basilica of Guadalupe is the most visited Catholic pilgrimage site in the world. It’s located very close to Mexico City and stands out as an enormous religious complex which consists of both Old Basilica and Modern Basilica and I think should be visited no matter if you are religious or not. While leaving Mexico City and heading to my next destination, I was contemplating the gray-colorful suburban favelas. Many of these people have no water and electricity and the government pays them to paint their houses in order to collect votes for their political party. Mexico, like any other Latin-American city, is full of contrasts and you will see it very clearly on every corner.

There were many times during my stay when my heart was breaking. The way the poverty collides with the richness in this country is extremely sad. When I think about Mexico I don’t have only nice pictures in my head. I will remember everything, the good and the bad things and that’s why I always say traveling makes you richer. Not only because of the quantity of places you visit, but mostly the quantity of smiles and tears you see. It helps you take a distance and appreciate more the things we have and take for granted every day.

I really loved Mexico City and everything it represents and even if there are many more beautiful destinations all over the country, I think it deserves a chance and should be visited at least once in a lifetime.

What about you? Would you consider Mexico City as a worth-seeing place? If you want to read more about Mexico, check our articles about Oaxaca, Chiapas, Yucatan, Morelos and Guerrero states, and don’t miss 10 reasons to visit this beautiful country. 🙂

Before I finish, I would like to share with you one of my favorite Frida Kahlo’s quotes. I simply love these words! 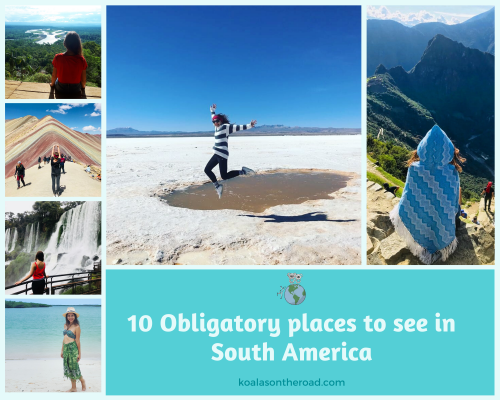 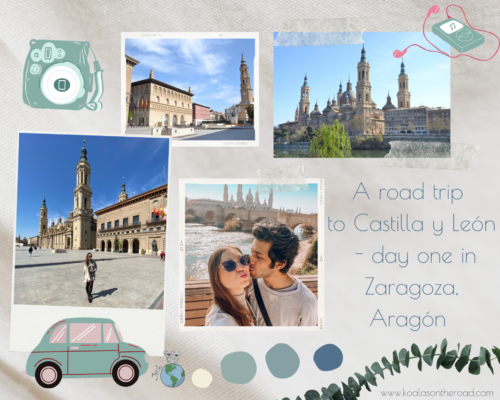